WHAT TO DO ON A SATURDAY? HOW ABOUT VISITING KENSINGTON'S SOUL?

Let's take a peek into the first book in my "Bound By Blood, The Legends" series and see what happens when Miranda goes scalpel to fang with a villainous vampiress. 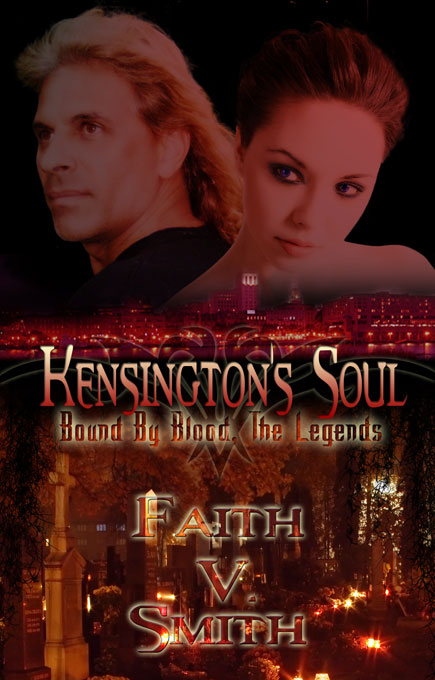 A hideous and spine chilling laughter echoed from the darkness behind Miranda.
“How touching.”
Gabriella!

Miranda’s heart stopped for one brief moment. Her body froze with fear as her mind commanded her to run.

The door stood at her back, as did Gabriella.

She had only one option—she would have to face Zacke’s ex and pray for a miracle.

Miranda gently replaced Heather’s hand back on the slab before covering her once more. She willed her spine to stay straight as she eased the drawer back into the walled recess. She didn’t want Gabriella looking at or possibly inflicting more damage on Heather’s mutilated body. She closed the door after the slab clicked into place and turned around.

Gabriella sat on a metal gurney next to the door. The ruby dress she wore emphasized the death-like color of her cheeks and contrasted with her dark hair. The woman who had tried to frighten Miranda to death certainly looked the part of a killer.

Miranda hadn’t paid any attention to Gabriella’s eyes the night the witch had kissed Zacke, but she noticed them now.
They glowed a deep purple, but as she watched, they took on a red cast. Her fabricated courage faded as she glimpsed Hell’s fires.

Miranda felt like a mouse waiting for a lion to pounce. Well, she would just have to show Gabriella a mouse could roar.

“Yes, and you are the irritating Dr. James.”
“Since I’m sure this is not a social visit, why don’t you tell me what you’re doing here?”

Gabriella’s eyes took on a deeper tinge of red. Miranda didn’t care for her hungry gaze.

“I am here to warn you once more that Zachary is mine.”

Miranda clenched and unclenched her fists but kept her eyes glued on Gabriella’s face. She wanted to be ready if Gabriella attacked—not that she could do much to protect herself against a vampire—but at least she wouldn’t die without a fight.

“We’ve had this conversation before. He isn’t a possession, Gabriella.”

“I have seen the way he kisses you.”

Miranda wasn’t sure she wanted to know how Gabriella had come by that bit of information. “From what I hear, Gabriella, you did more than kiss him. Yet you have no claim either.”

Miranda blinked twice. Had she just seen the woman fly off the gurney? As she watched, Gabriella moved toward the opposite side of the room—away from the door.

She needed something, anything to protect herself. An instrument table sat only a few feet away. Miranda shook off the paralysis threatening her legs.
She barely moved two feet before Gabriella swirled around. The woman must have eyes in the back of her head.

The sarcasm dripping off her words goaded Miranda. “Well, yes, as a matter of fact I am. I have patients to see, and this pissing contest about a man neither one of us can claim is ridiculous.”

Gabriella closed her eyes, and Miranda moved a bit closer to the instrument table.

“I didn’t believe any mortal capable of your courage, Dr. James. I admire someone who can, or should I say attempt to stand up to me.”

Had the woman just paid her a backhanded compliment? Miranda didn’t know nor did she care. Only two more steps, and she could grasp the scalpel handle peeking out from under its sterile covering.

“So does that mean you’re going to leave now? Fly back to wherever you came from?”

Gabriella snarled and closed her eyes. Miranda lunged for the table. She had the sharp instrument in her hand when she heard a guttural growl. Great, she had really angered her this time.

Miranda turned to face Gabriella and wished she could close her eyes. The woman’s former beauty had disappeared. Her eyes now shone crimson and snarling lips revealed four incisors that would make a dentist cringe. Red tinged their tips, and Miranda didn’t even want to guess if the blood-colored substance had come from Heather’s poor body.

She raised her weapon a split second before Gabriella attacked.

If you like this peek, let me know by subscribing by email to my blog or scroll down the page to find other ways you can follow me!

So I've been working on a project that I think readers will like.  It will feature a Highlander, of course he's hot, and a mortal woman who is recovering from a brutal attack.

Well, while I was doing a bit of research, I got to looking at weaponry.  I love swords and daggers. Of course with my height it is hard for me to pick up a sword.  Some of them are almost as tall as I am.

However, I thought you might want to look at a couple of pieces of weaponry I have.  One is a two-handed bastard sword. This sword usually requires two hands to handle.This is not a good picture but to give you a bit on the dimensions, I am a whopping five-foot-one, and the hilt comes to my cleavage.

My husband a big man could hold it in one hand but not for long.  The lady's dagger is more my style. 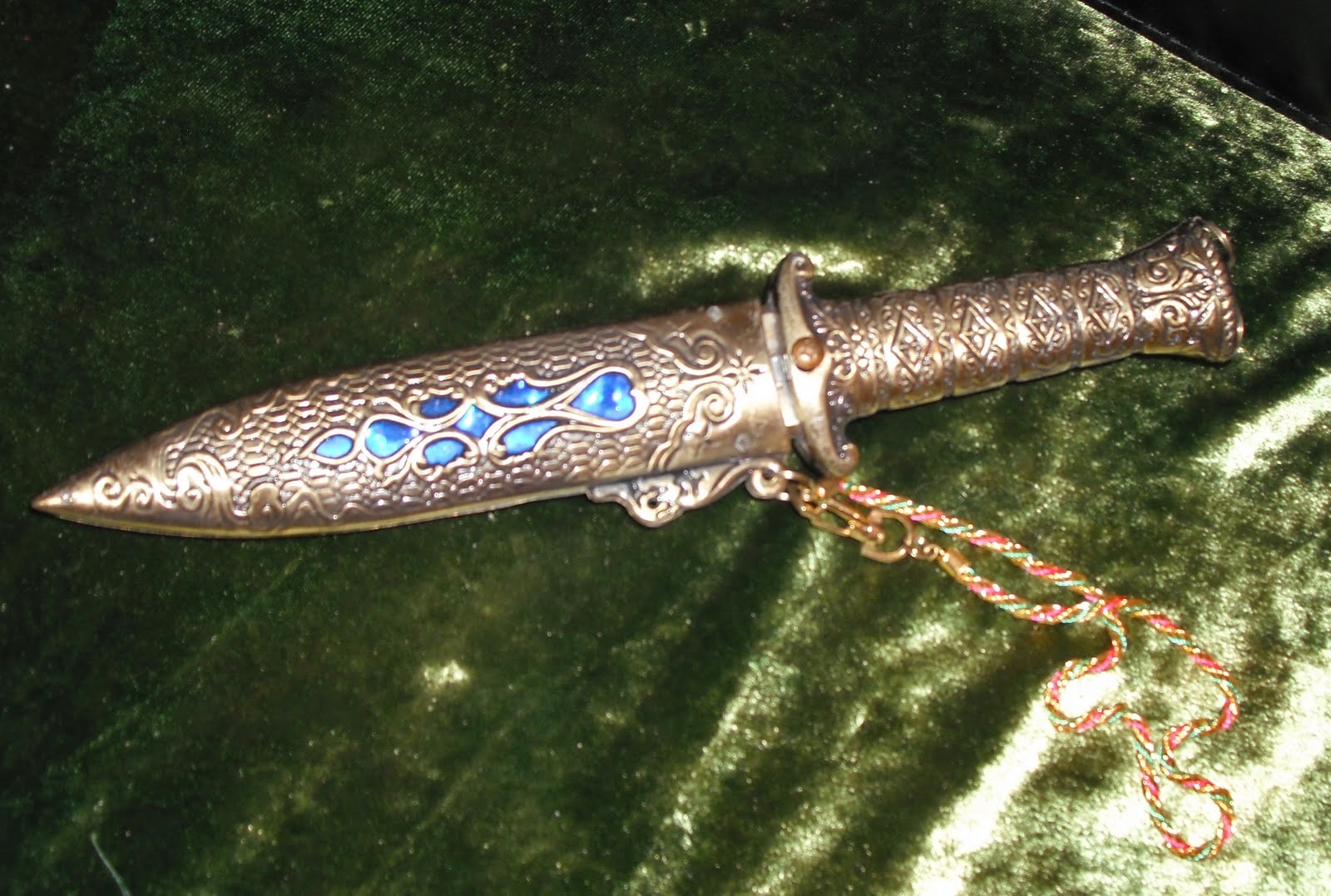 So enjoy!  And in the meantime, the characterization notes for my hero, heroine, a best friend, and a villain is in the bag or my computer.  Over 1,200 words worth.

Hugs!  And make sure you follow me if you have not already done so. It is my goal this year to bring you a lot of different takes on my work, my author friends, and what is happening in my life as a writer!
Posted by Faith V. Smith at 4:26 PM No comments:

Okay, for those who don't know me, I used to cook every night.  Well, now I don't...lol.  My daughter says I get too distracted, and I tend to not follow recipes.  However, this afternoon, I am putting together a pot of spaghetti, that I hope will be delicious after it simmers for several hours.

So what's on your menu for tonight?

Question Of The Day!

If you could have the highlander of your dreams and were able to choose which time frame you would live in, which one would you choose?

I personally want a castle on a loch with a balcony, embedded into the mountain the castle sits on. I also want to live in the past with my highlander all decked out in his kilt, he doesn't truly have to wear anything else, but I would also like to have wireless, central heat and air when needed.

So who thinks I'm a bit crazy, or how many of you out there actually feel the same way I do?

I truly want to know how many of us with a romantic outlook want to have the hot highlander but also a bit of creature comforts. Oh yeah, I definitely would have to have my laptop and my phone.

IF YOU THINK YOU'RE HAVING A BAD HAIR DAY...CHECK OUT NANCY J. COHEN'S LATEST MYSTERY

Nancy's latest installment in her mystery series, "A Bad Hair Day" takes readers into a world of death, humor, and caps it off with a totally awesome heroine named Marla. When two people in her Home Owners Association are murdered, Marla gets involved despite her police detective  husband's rule to keep out of his business. And when the killer gets on her trail, Marla needs more than her skills as a hairdresser to survive. 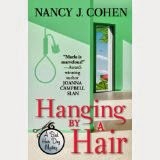 "Hanging By A Hair" is a wonderful and intriguing mystery set in the sunny state of Florida. And if you haven't read her other books in the series, don't despair, this book is a stand-alone and  easy to follow. Although this is my first foray into Marla's world, I can't wait to read more of this exciting series.
Way to go, Nancy!
Posted by Faith V. Smith at 7:52 PM No comments:

JUST WHEN YOU THOUGHT I WOULD NEVER FINISH...


Okay, well I believe I have finished with updates on my blog!

Please check out the book page, it is updated as is the excerpt page. I have also added some reviews I didn't even know about. How terrible is that?  Oh well, like I said last year and the first of this year have been a tad complicated for me.


I hope you will be able to find all the information you need now, and that you will love the blog enough to come back and often.

I plan on having guest authors here at the blog starting in August. If you have an idea of whom you would like to see then please comment or shoot me an email.


Being an author is hard work but my readers make it worth while, so remember I love to hear what you like or don't like.

WHAT'S BETTER THAN ONE HIGHLANDER ROMANCE?

I know the answer to that one!  It's a box set of four Highlander romances. 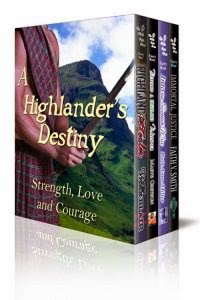 And yes yours truly!

So mark the date down.  JULY 17TH and then rush on over to pick up your copy of "A Highlander's Destiny."
Posted by Faith V. Smith at 5:57 PM No comments:

I am still redesigning my blog!  I am so happy!
Posted by Faith V. Smith at 5:36 PM No comments:

I have not finished everything I wanted to do today in updating my blog, but plan to finish it hopefully tomorrow night.  So hang in there with me.
Posted by Faith V. Smith at 8:44 PM No comments:

EXCITING NEWS AND MY APOLOGIES

To all my awesome fans, I cannot tell you how much I have missed you over the last year!  It seems so long and yet hearing from you all outside my blog has been terrific!

First let me say, last year was not great for me health wise and this year started out with a bang. I lost the eyesight in my left eye due to a retina detachment. Blessedly Dr. Sharma at Georgia Retina was able to do surgery and get me back a lot of my vision. However, I will need to have more surgery to get it back all the way.

But the good news is... I am still writing, and ta da my website has been revamped courtesy of Rae Monet.

Please make your way over there to check out the new look!  Faith V. Smith

Also please take note on the links page, we have added a lot of the places you were able to visit in my vampire and immortal executioner realms.

I also have a brand new email addy so you can get in touch with me any time!


Looking forward to keeping in touch with you and for sharing some great reviews I found online for some of my books!