For those who have been asking for print books for two of my time-travels,  you will have your chance on April 29th.  "Viking, Go Home" which was released back in 2010 and "Semper Fi Magick" in 2011 will be out in print form.  My awesome publishing house "The Wild Rose Press" has combined both these previously only ebooks into one book under the title of "Soul Of A Warrior." 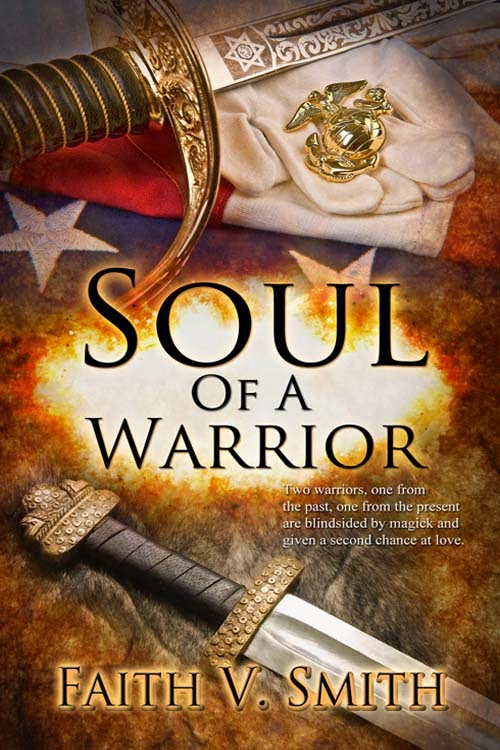 Wulgar Thorrason's inability to control his desires earns him the ire of a faery princess. Sent forward in time to modern-day Michigan, he will have to learn the difference between lust and love. The petite beauty, Raven Harrison piques his interest, but how can he prove his feelings are more than lust when she scoffs at his advances and does n’ot believe his tale of being a time-traveling Viking?

After a failed mission, Special Ops Marine Derek Harrison wants peace and quiet as he recuperates at his cousin's home. What he gets is a sex-on-heels woman with a snooty attitude. Not only does she remind him of his ex-fiancée, but she claims she's a faery princess of the Seelie Court. Now she's not only getting under his skin, she's getting into his head and delving into his nightmares. Maybe there is more to Catriona than he first realized.

Two couples battle time and destiny. Will they discover love before it's too late?

This book and "Tiernan's Punishment" for those who know who Tiernan is from the second book will be with me in Dallas at the RT Booklovers Convention. I will also have copies of "Immortal Justice."


And just so you know, I am diligently working on a fantasy trilogy that my editor believes will rock your socks off, or maybe snap your wands?  Anyway, glad to be back with you!


I have been a fan of Amanda's for several years. Not only is she an awesome author, but a fantastic friend.  I am so pleased she was able to stop by my blog for some insight into what she is like and what is coming up next when comes to her books!

Please tell us a bit about yourself.

My dad, as it happens was a regional rep for a large magazine publisher, so I grew up perusing such classics as Vampirella and Monsters, Inc. magazine. I love Alfred Hitchcock stories as well as Poe, so it’s a wonder that I don’t write more paranormal I suppose.

How did you fall into writing and becoming a published author ?

I think I’ve evolved into a storyteller. I am an artist and my dream was to be an cartoonist for Disney, but life happens (as it often does) and I like to think that I now paint pictures with words.

I was the last person in our house to think we needed a computer. (Ha!) I started out writing a weekly newspaper column on the importance of the Fine Arts in schools…from there, I found Lori Soard, then president of the online chapter of RWA (Romance Writers of America)and she was a wonderful tutor. I took some writing classes, and eventually did some reviewing of many genres before the writing bug bit me. That was about 14 years ago and the journey has been amazing.

Is writing something you’ve always wanted to do?

Not at all. I loved to read. I loved to express my storytelling by way of my sketches and painting.  I think having kids also gave me greater incentive to write. We surrounded our kids with books—fiction and non-fiction—when they were growing up and too the newspaper column opened my eyes more to what was out there.  Once I began to let my imagination run free, I began to pen stories as though painting a picture. I’m still a very visual writer.

Out of all the books you’ve written, do you have a favorite and why?

I don’t have a favorite. Each one is like a literary tattoo on my soul of where I was in my life at that time.

If you could go back and rewrite the ending for one of your books which book would it be?

None of them. LOL Is that weird?

Where do you get your plots and your characters from?

Everything…one line in a song, observing people in real life, a news clip…its often said authors are like sponges absorbing the emotions around them…so true.

I know you’re one busy lady, so tell me what you do when you have some downtime.

I love spending time with family and friends. Getting back to nature, walking, traveling the backroads of this country, being near the Great Lakes-(yes, any of them, I’m obsessed)

Do have any particular authors who are your favorites?

As far as reading, I have many. As far as who they are as people, there, too, I have many. I do make it a rule not to read in the genre that I’m currently writing and actually researching is one of my favorite reads!

Can you tell us what’s next on your schedule?

My current WIP is RENEGADE HEARTS, Book III in the Kinnison Legacy series. I also have another series in the wings and a possible few more books to spin-off from the Kinnison books. I will be releasing my time-travel duet—Tales of the Sweet Magnolia-Wild & Unruly, Book I and Fallen Angel, Book II—on March 20(first day of spring!) as a boxed set! There may yet be more tales from the Sweet Magnolia as well!

And is there any type of advice you could give aspiring authors?

There is tons of advice out there. Learn your craft. Nurture your imagination. Be kind. Be tenacious. Understand there will be hills and valleys, it’s about doing what you love.
And is there anything you would like to say to your fans? My heart is full of gratitude when I hear that someone has enjoyed one of my stories. My readers are my greatest inspiration!

Three men. One legacy.Meet the Kinnsions and the women who will tame them!

Amanda has been referred to as a "true artist in the writing realm' and her zest for life inspires her "character-driven" stories. Her passion is to take ordinary people and place them in extraordinary situations, delving into the realm of potential and possibility as she watches them become the heroes and heroines of their own stories. She counts herself fortunate to be able to do what she loves, aspires to stay fresh and unique to her voice and listen to her readers.