As you all know I have been a fan of paranormal books for a long time. R E Mullins is an author who does an awesome job with her characters and keeps me hanging on for more.  I am so happy she could take time out from her writing schedule to answer some questions for me as well as her fans!

Before we talk about the third book in your series why don't you tell readers what evolved in your thought process when you were coming up with the series as a whole.

My former employers, at the medical lab I where I used to work, probably won’t appreciate knowing I came up with the idea for a romance featuring vampires while I was drawing blood samples. But that’s how it happened. Patients, thinking they were just hysterical, liked to call the phlebotomists ‘vampires’ or they’d tell us really bad vampire jokes. I used a few of these jokes in my debut novel: IT’S A WONDERFUL UNDEAD LIFE. 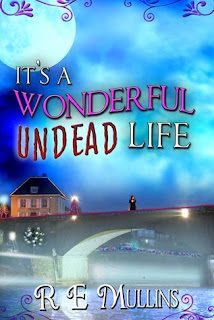 Was there a reason you chose two brothers and two sisters for your series?

I grew up in a four children household so the number seemed perfectly reasonable to me. Their father, Andris Blautsauger was studying for the priesthood before he was turned into a vampire and he named his children after the Angels of Prayer: Gabriel, Michael, Metatron, and Raphael. I, however, put my foot down at four he-vamps and insisted on adding a few she-vamps in the mix. A compromised was reached, two of the names got feminized, and we had Michaela and Metta.

Is there one in particular character that you wanted to write their book specifically, that you just had to get it out?

From the very first, I loved the third child and youngest daughter of the Blautsauger family—I don’t think that has anything to do with the fact I am the third child and youngest sister in my sibling line-up. Metta’s family and friends love her but no one takes her seriously. They have never taken the time to see beyond her happy-go-lucky facade. Unbeknownst to them, however, Metta is filled with secrets and hidden depths.

Getting reviews is an important part of a writer's life. What do you take away from a good review and what do you learn from a bad review?

Reviews drive a book’s success and every one of them, good or bad, is appreciated. Of course, like most I prefer to read a good review. Praise can have me walking on air for days. Thoughtfully worded criticism from a reader who has obviously read the book is also of great value. I’m still new at writing and I do take their advice to heart.

Looking back over your publishing journey so far, what is the one thing you will always remember?

I first wrote, IT’S A WONDERFUL UNDEAD LIFE in 2008. I submitted it to The Wild Rose Press and the manuscript was accepted with certain changes. At the time life had me a little overwhelmed and I sat on things. Truth be told I wasn’t sure the book was good enough—that I was good enough to be an actual writer. Almost two years later, I re-contacted The Wild Rose Press editor I’d spoken with the first time, and SHE REMEMBERED MY BOOK. To this day I’m amazed at how clearly she remembered the plot.
Then came the hard part. Like an adult teaching a child to walk, my editor held my hand through all of the re-writes. She remained positive, supportive, and upbeat. This was despite the fact I continually changed my mind and rewrote the entire manuscript so many times it took another couple of years to get it ready for print. Shall I say my editor is a saint?

Now, let's talk about your 3rd book, A Vampire To Be Reckoned with.  You went a bit of a different route with this one by tossing in some really awesome historical scenes. Was there a reason you decided to do this? 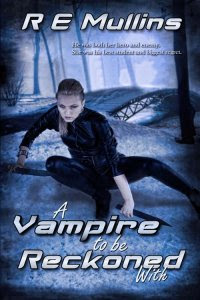 Metta’s story is a little different as she met and fell in love with another vampire back in the Restoration Period after the Civil War. The ornery minx also insisted I tell her whole story. I fell in love with researching the different eras and showing what shaped Metta’s personality.

What can readers look forward to for your 4th book?

Michaela. Ah, Michaela, she is the hardest of the siblings to write about as she has a rather prickly exterior along with a know-it-all attitude...every family has one and the Blautsaugers are no different. However, like Metta, Michaela has some hidden depths and might prove to be likeable after all.
If you could give one bit of advice to want to be authors what would it be?

Persevere and stop doubting yourself. That’s the best and only real advice I can give.

I know that once you finish the 4th book, you will have wrapped up the story of all the siblings, so what do you plan to write next?

I think I’ve one more vampire book to revisit. Called WAKING UP DEAD, I wrote it after my debut novel but it needs a complete overhaul. I may add a bit about the Blautsaugers but it will feature an entirely different cast of characters. After that I’m thinking of giving the Contemporary Romance genre a go.

And ending on a humorous note, please choose one scene from your books that you laughed when you wrote it to share with us.

Some of my favorite characters in A VAMPIRE TO BE RECKONED WITH are the four ministers that ask Metta help them take down a group of human traffickers. The whole time I was writing them, I couldn’t help but think of the Keystone Cops. In this scene the ministers are robbing the Red Cross before going to Metta’s aid.

They stood silently in front of the large refrigerated storage unit. All wore equally perplexed frowns as they regarded the packaged blood inside, neatly stowed into two rows of clearly marked storage bins. The top containers were designated A+, B+, O+, and AB+. The bottom row held their negative counterparts.

“I didn’t think about the different kinds,” Jacob whispered. “I mean, is blood, um, blood to them,” he wildly gestured, “or…do they need a certain type?”

Do you think one variety tastes like apple pie and another like spinach?” Hayden felt his face heat when he realized the others had fallen silent and were looking at him in disbelief. “Just saying…”

You’ve got to be kidding,” Dahn said after a moment, “or are you really suggesting A positive blood tastes different from O negative?”

“How would I know?” Hayden scowled but was determined to stick to his guns, “For that matter, how do you know it doesn’t? Have you tried them?”

“If they have taste buds, they must use them. Do you want to hand her spinach when she needs or expects apple pie?”

“She deserves apple pie—if that’s what she likes.”
“Okay, you made your point.”

After exchanging bemused glances, their mystified gazes returned to the thick, vinyl-packed pints of blood. After a moment, Father Henry tapped the top of his wrist to indicate the time. “Take one of each?” he asked and then his eyes widened again. “Oh, Lord, we never stopped to think how much she’d need.”

“Oy vey iz mir,” Jacob muttered and dramatically threw up his hands at this new dilemma, “how should we know? How many pints of blood are in the average body?”

“I don’t remember,” Dahn’s brow furrowed as he tried to calculate, “about four to five liters?”

“Give that to me in pints,” Hayden demanded. “We’re preachers—not mathematicians,” he lobbed his own subtle jab back at Rabbi Bauer.

“Meh,” Jacob shrugged in response, but his eyes gleamed with appreciation.

“Are you asking me because I’m Asian?” Dahn pointedly asked right before he immediately said, “ten. Five liters is ten pints. Does that sound like enough for her? Or too much?” He slid open the large, glass door to the storage refrigerator.

“She’s a tiny thing. She might not even need that much.”

“Hopefully,” Dahn countered, “she won’t need any and this is all for nothing.”

“All this conjecture is based on human’s needs,” the priest said worriedly. “What if she’s wounded and bleeding? We might have to keep, er, filling her up.”

“Good point,” Jacob agreed, “it’s not like we can take her to the hospital.”

“Better err on the safe side then,” Hayden advised. Yet they continued to stand a moment longer eyeing the sterile containers of blood with differing looks of repugnance.

Finally, the mild Methodist swallowed and reached out to gingerly take one of the bags marked with a capital A and followed by a plus sign. “Come on,” his voice seemed to strengthen after he’d picked it up and nothing bad happened. “Since we don’t know how much she might need or which type…don’t be shy.”

That seemed to break the ice and the ministers began grabbing blood filled bags and tucking them beneath their coats. A few minutes later, four very pregnant looking gentlemen with arms protectively cupped under their swollen bellies waddled out of the Red Cross building and piled into the clearly marked Lutheran Church van. 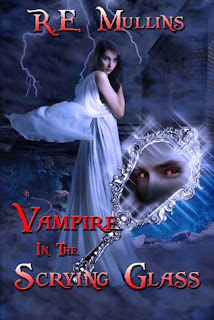 Only to discover they had unexpected company.

Don't forget to check out the second book:

Thank you, Faith for having me on your blog today. RE

Great interview. These books sound like so much fun. Lots of humor, which isn't so easy to write, but seems well done here!

I am so happy you are here. I love your books!

Thanks for stopping by. I love humor in books too, and RE's has excitement also!

Thanks, Gini. I like to add a little humor and a little gross out factor to each book