I'm so  happy to have Anna with us today. She is so talented and has a talent for penning trail-blazing heroines! 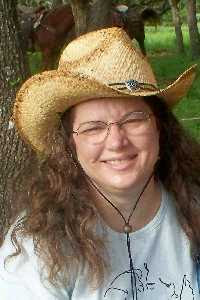 Pearl Hart – American Desperado
By Anna Kathryn Lanier
What should have been a life of modesty and respect, instead turned into a life of crime and legend.  Pearl Taylor,  the daughter of middle-class parents in Ontario, Canada, met and fell in love at the age of seventeen with a Nar ‘do well gambler and drinker, Fred Hart and eloped.
Five years later, in 1893, the couple made their way to the Colombian Exposition in Chicago where Fred found a job as a sideshow barker.  Pearl worked a number of odd jobs and escaped her dreary life by spending the afternoons watching Buffalo Bill’s Wild West show and dreaming of the romantic West.
Finally tiring of her hard-drinking, abusive husband, Pearl packed up and headed West for the start of a new life. Unfortunately, it was a short-lived dream when she discovered she was pregnant. She returned to Canada and her family for the support they could give her.  After giving birth to a son, Pearl left the baby in her mother’s care and moved to Arizona.  She worked odd jobs to support herself in the less than glamorous and heroic West than she had envisioned.
Fred followed her trail and when he caught up with her, he begged forgiveness and promised changes.  For a while, the couple lived a happier domestic life, however, after the arrival of a daughter Fred abandoned his family, allegedly to join Teddy Roosevelt’s Rough Riders. 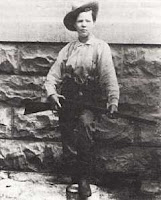 Pearl once again returned to her parents for support.  She didn’t stay long and soon returned to Arizona, leaving her children behind.  Once back in the West, she worked odd jobs and as a cook in the various mining towns.  In 1899, she took up with a miner by the name of Joe Boot. After she received word that her mother was ill and needed money for medical care, she and Joe devised several schemes to raise the money.  When none of them proved lucrative enough, they decided to rob the Globe to Florence stagecoach.
With her hair cut and wearing Joe’s clothing, Pearl helped rob the three passengers of over $400 and a gun.  Feeling sorry for the passengers, Pearl is said to have returned a dollar each for food.  The bandits high-tailed it into the unfamiliar desert foothills, where they promptly got lost.  After wandering around aimlessly for several days, they awoke one morning to find themselves surrounded by a sheriff and his posse.
While being held for trial, the “Queen Bandit” milked her fame for all its worth.  Allowed access to visitors and reports, she posed for pictures and signed autographs. In a surprise verdict and despite pleading guilty, the jury acquitted her, perhaps finding sympathy in her claim that she was trying to raise money for her dear, sick mother.  The judge, however, was furious.  He had Pearl tried again for “unlawfully carrying a gun,” the gun being the one stolen in the robbery.  This time, she was found guilty and sentenced to five years in the Yuma Territorial Prison.
Her fame grew as she served her time.  Reporters visited her often, posing her for pictures with unloaded guns.  By the time she was paroled 18 months into her sentence, she was a legend.  She also claimed she was pregnant and may have been paroled early to avoid a scandal, as she would have conceived while in custody.  The claim seems to have been a ruse, though. There’s no record of a third child being born.
After her release from prison, Pearl moved to Kansas City and starred in a theater production (written by her sister) of her life.  The play was short-lived though and Pearl’s fame faded.
In 1924, she’s alleged to have visited the courthouse where she was tried. Upon leaving, she told the attendant, “Nothing’s changed.” H asked who she was and, rather dramatically she replied, “Pearl Hart, the lady bandit.”
What happened to Pearl after that is unclear.  There is a claim she died in 1925 in Kansas City, another she lived in California until 1952.  The most knocked about story, however, is that she married an Arizona rancher, Calvin Bywater, and lived until the mid-1950’s as a hard-working, cigar-smoking, blue-streak-cussing law abiding citizen.  Whatever happened to Pearl in her later years, her younger ones were certainly bigger than life and she appears to be the only woman tried for robbing a stagecoach.
Leave a comment for a chance to win a copy of Lynn Santa Lucia’s book, Ladies First: History’s greatest female trailblazers, winners and mavericks. I’ll draw for a winner Saturday.  I’ve found this a fascinating book, full of interesting stories of famous and not-so famous women throughout history. - akl
References:
Ladies First: History’s greatest female trailblazers, winners and mavericks by Lynn Santa Lucia
http://www.legendsofamerica.com/we-pearlhart.html
http://ladybelleoutlaw.homestead.com/WomenOfTheWest.html
Anna Kathryn Lanier writes both contemporary and historical Westerns for The Wild Rose Press.  Her historical novella “Salvation Bride” was the 2009 Preditors and Editors Readers Poll Award for Best Romance Short Story.  Read more about Anna Kathryn at www.aklanier.com, and www.annakathrynlanier.blogspot.com.
Anna Kathryn will be presenting an online class, Pioneering Women of the West, through Hearts Through History (www.heartsthroughhistory.com) in August. Learn more about the class at her website.
Posted by Faith V. Smith at 6:00 AM

Good to have you here with us! I love how you mingle history and romance!

Hi, Faith. Thanks for having me here today. I found Pearl to be an interesting character. I do wish there was more information about her life, but what we do know is certainly fodder for stories.

You are so welcome, Anna! I have always loved history. I find it romantic in itself! So if you could be Pearl what would you do?

Anna Kathryn, I had forgotten about Pearl Hart. I wonder what happened to her children, don't you? We have friends raising their grandchildren, and I guess that's nothing new. Thanks for sharing a great story of the west.

That was a great article about Pearl and the unromantic romantic life she led. I have never heard of her how did you find her through history?

Good morning, Anna. And, thanks, for the great interview. Being from AZ, I love to read stories based from true life and legends that happened out here. I will definitely put your book, American Desperado, in my to be read soon pile. And, I have visited the Yuma prison and, wow, that was no place to be!
Thanks, Faith, for inviting Anna to your blog.
Ladies, have a wonderful day.

Welcome! Thanks for dropping by. Anna is awesome!

Thanks for finding your way here!

Tia, as always it is a pleasure to see you here! No hardship on having Anna, she is a doll!

Hi, all! I leave for a few minutes and come back to wonderful comments!

Faith, if I were Pearl, I think I'd try to not get caught..lol.

I, too, wondered about her children. Do you think her abandonment affected them? After returning to Kansas City, did she have a relationship with them? Or if she did marry the rancher, did she send for them?

Jenn, I learned about her in the book I'm giving away LADIES FIRST. Lynn did a chapter on her.

Hi, Paty, thanks for stopping by.

Tia, I don't have a book called American Desperado, that's just the title of this blog. I have several novellas out through The Wild Rose Press. I do suggest, that if you don't win LADIES FIRST, you buy it. It's full of biographies of women throughout history.

Faith,
Thanks for sharing the history of Pearl. Kind of makes the old west a little less glamorous and a little more realistic, loser boyfriends and all. Not much has changed through time. Sounds like a great book to read.

Oh, gosh. Well, it sounds like a good title. lol. Anyway, thanks for clearing that up, I'd have been looking all over wondering why I couldn't find that title. I'm going to go check you out over at TWRP.

Anna--what a story! I never heard of Pearl Hart, but I'm glad you told her story. Can you imagine doing all that stuff she did? Not me, no siree. Thanks for the entertaining tale, and congratulations on your release. Celia

I love this accounting. I've not heard of her before. What a character she must have been. Wouldn't it be fun to have her in one of our stories?!

Hi, everyone. I'm back from my half day of subbing....a lot of fun when there's less than 10 days of school left.

Tai, thanks for your interest in my stories. They're all short, one only 17 pages long, so a quick read there! But you're right, American Desperado is a great title.

LOL, Kathy. So true. The men in her life weren't all that reliable, were they. Though I should add that Joe was also sentenced to prison and a longer term than Pearl.

Celia, she certainly lived an interesting life. I hope she found happiness with Bywater and did live a good life as a rancher's wife.

Oh, Paisley, what great idea. The three people one the stage were male, including a Chinaman, but poetic license, you could put a fourth on the stage. Or meet up with her elsewhere....

I always forgot to say WHEN I'll draw for the winner. So, I'll draw on Saturday, to give people plenty of time to comment....

Awesome Anna! So everyone make sure you check back here on Saturday!

Thanks everyone who stopped by and commented!

Anna, you were a dream guest! Thank you for you time!

Awesome post, and what a great inspiration for a story! I loved it!

Thanks for having me, Faith.

Hi, D'Ann. Thanks for stopping by.

See, I forgot to draw on Saturday! Anyway, I remembered today and congratulations to Tia! She won a copy of LADIES FIRST by Lynn St. Lucia. Thanks for everyone who dropped by and you'll have another chance to win a copy of this book in August. I'll be giving one away during the class I'm teaching at the Hearts Through History campus.

Wow, this is awesome! Congrats Tia!

Anna, thank you so much for being here on the blog! I love the historical lure you bring to your fans!

Congratulations to Tia Dani! She is the winner of Anna's giveaway!